My sister Sandy, and brother in law Steve Gogas have been a pillar in the Tampa Bay Area for many decades. Steve has been a coach for the Tampa Bay Kickers for decades. He has done whatever it takes to get them to the championships even paying out of his own pocket. He is even in the Florida Sports Hall of fame. They owned a restaurant in Land o lakes for many years. Sandy is a manager at Walmart and works harder than anyone I have ever known. Steve has retired and looked forward to spending time just being home working in his garden with his dog following him around. They rescued a puppy from hurricane Harvey.

He came home and ended up with a heart defect at six months and they had to put him down. Steve thought he would never be able to get another dog. Then Sandy and his daughter Christina found puppies for rescue. They went to look at them and just couldn’t choose one so they chose two! A brother and sister. They named the girl Ally and the boy Ace after our father. Ace and Ally we’re playing and they do play rough. All of a sudden Ally couldn’t walk on her leg.

They took her on New Years Eve to an emergency clinic and had an X-ray taken. They said she would need to see a orthopedic surgeon and sent her home. Sandy and Steve took turns by her side for the next 24 plus hours until a surgeon could be seen. The longest New Years Day Ever! When finally seen they found out this is the worst possible break she could have! 1-They could go in and try and repair it 2-they could amputate 3- put the puppy down
Ally being perfectly healthy number 3 is not an option!

When she looks at you with those big brown eyes they knew they had to give her a fighting chance even if it put them in debt. They opted to have the surgery to repair. It will be a long recovery but Steve is home and will work with her every chance he gets. I am just asking please help them to get out of this debt they are so kind hearted and do not deserve to be in this situation! They have helped many people out in the past and would never ask for help. I know the struggle and strain this surgery is putting on them so please every dollar would help. Please if you can help just donate!

For Ally, For Sandy, For Steve 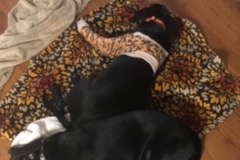 This article was posted in Animals and tagged #, $1.00 $2.00 $5.00 any amount helps, help! Every dollar counts, please donate anything you can to help!, Rescued puppy Ally surgery fund.