ALERT! ALFIE AND I NEED YOUR HELP! GoFundME CrowdFundingExposure.com Campaign 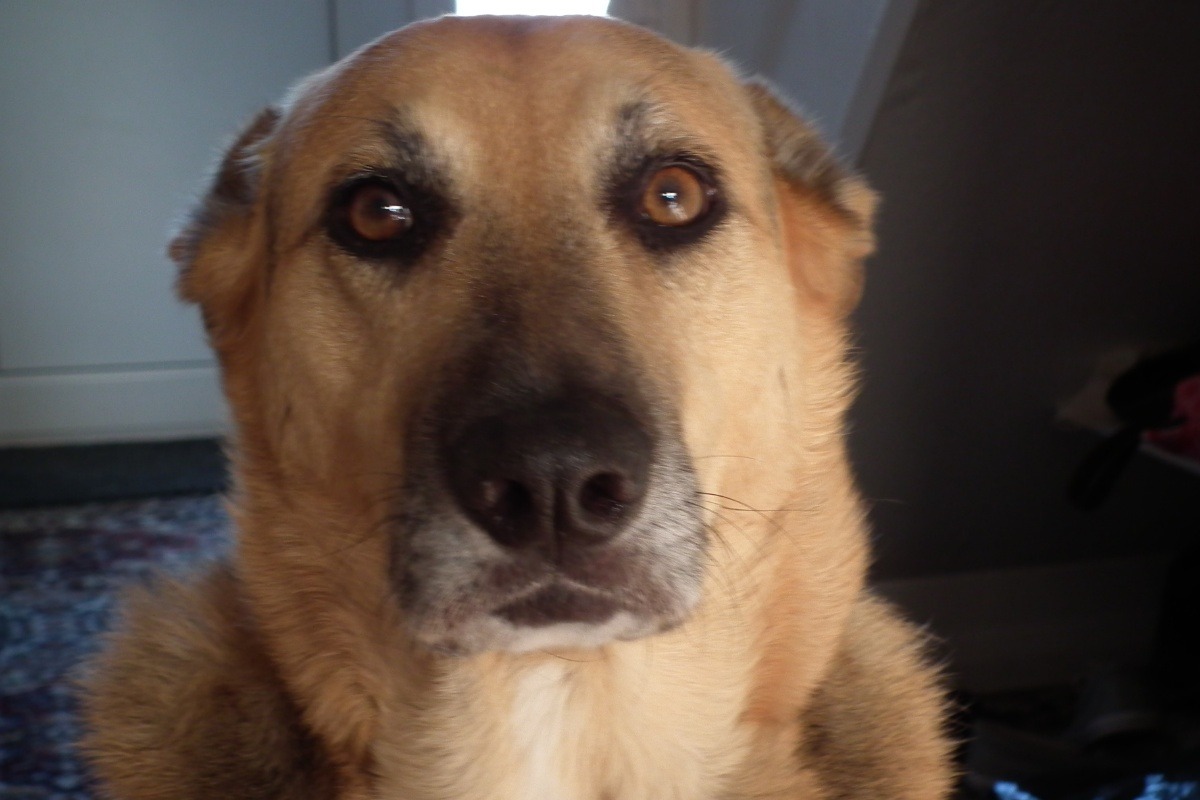   
Help save Alfredo (aka Alfie aka Alf),  my best friend and companion of 9 years. We would be very grateful for any donations and shares to help my Alf continue to live a quality life into his senior years and to be able to spend a few more years together.

Alfie has been diagnosed with a severe condition which nearly cost him his life. He has Inflammatory Bowel Disease (IBD) and developed a rectal stricture caused by scar tissue formed during the healing process.

" I was rescued  when I was just a few weeks old in Spain and given a forever home by my human Mum and Dad. They brought me back to England to live and I love it here and I am now a part of the family.  We have helped each other through the grief of losing Dad to Bowel Cancer four years ago -  we both loved him very much and miss him every day.  Please help me get better so Mum and I can spend a few more years together"

Dad and I in The mountains in Spain 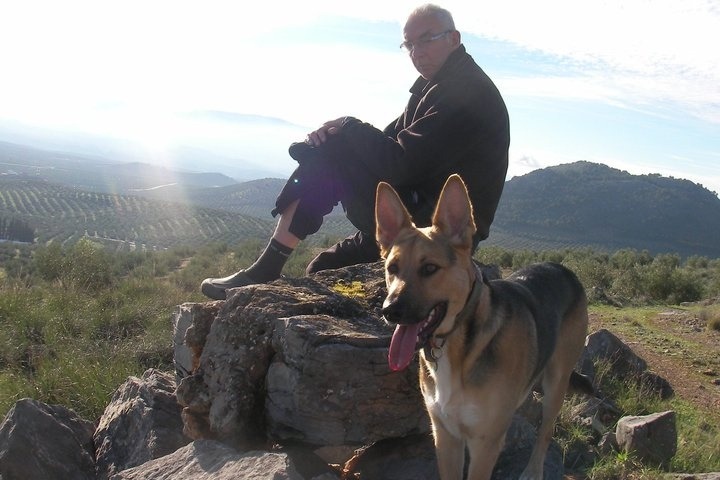 Mum tells me she fell in Love with me when she saw this photo of me. I was found by Uncle George in a muddy ditch in the Campo in southern Spain.  Aunty Pam cleaned me up. Mum and Dad were in England when I was found but we had a house in Spain. We stayed in Spain until I had all my vaccinations and Rabies blood test. We travelled by road and ferry and arrived in England when I was 16 months old. Mum didn't want to go back to Spain so we stayed in England and I never went back. Yippee! But I do miss Pam and George... 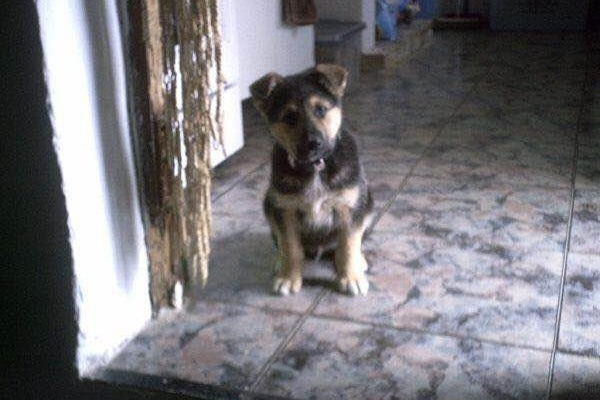 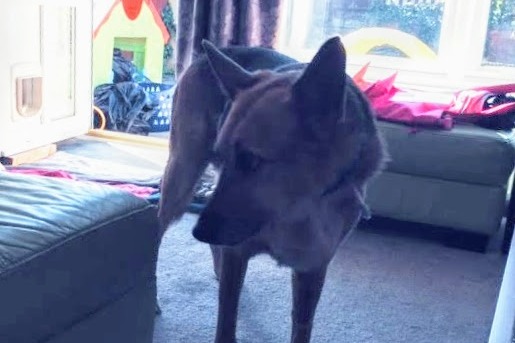   
Me in December after that horrible rectal procedure 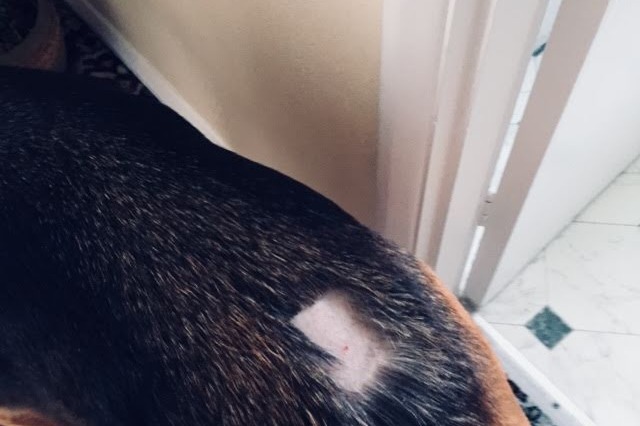 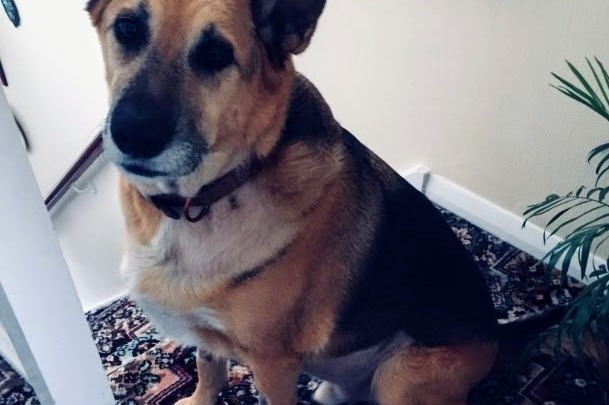 I'm putting this one in as I think I look darn GUAPO (handsome - I did learn some Spanish) yeah yeah yeah so it's me when I was younger - about 2 years old. 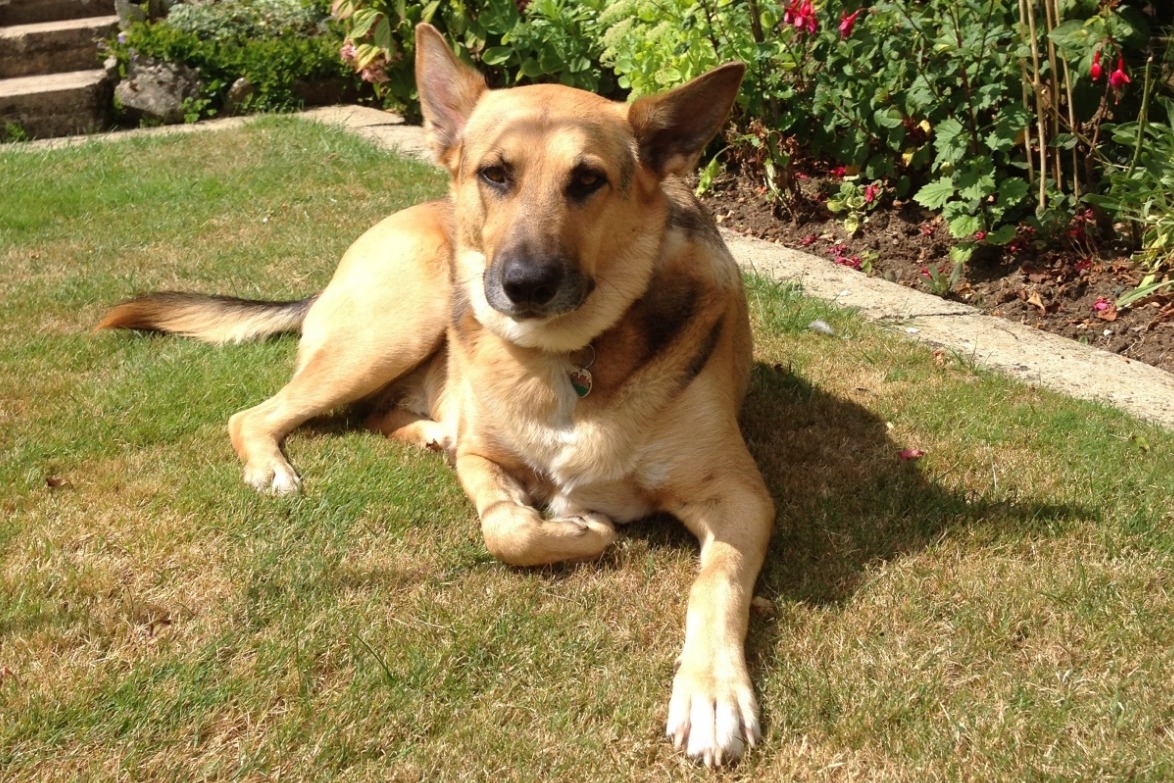 Alfie  received life-saving treatment after an acute episode of diarrhoea and sickness on Saturday 8th September 2018. He was in a state of near collapse. I rushed him to the emergency out of hours vet and after a few nights and days he came home. I feared I was going to lose him.

He was referred to a specialist vet and spent a further 5 days and nights in hospital. Alfie's treatment included a range of diagnostic tests - a full colonoscopy, ultrasound, biopsies, under anaesthetic. He was still a very poorly boy as his colon was very badly inflamed and ulcerated and therefore not working as it should. Test results revealed he had an over-activity of toxin-releasing Clostridium bacteria in his colon; probably triggered by something he has picked-up in the outdoor environment. Inflammatory cells were in overdrive due to an immune reaction. Unfortunately as the exact causes of IBD are poorly understood it can take a while to work out the best treatment.

When he was home I had to  feed him through a tube and he had frequent sudden diarrhoea. There was a lot of outside cleaning up to do. Luckily the weather in Sept/Oct was quite mild so I could keep the back door open all night. When we went out for a walk I had to go armed with toilet tissue, gloves, plenty of bags, and water to clean-up as it would happen so suddenly. My local Vet said they had never seen bloody diarrhoea that bad.

IBD can be a successfully managed condition but diligent medication, a strict diet and frequent check-up’s is a necessity but also comes at a huge cost, particularly as he is under the care of a specialist vet. My pet insurance has paid out £6,285.76 out of a possible £7,500. My cover does not start again until May 1st 2019. I am hoping the premium will not go up too much. The insurance covered the cost of the initial life-saving treatment and subsequent diagnostic tests as well as hospitalisation and other expenses.  Unfortunately because of Alf’s age I had to pay the set excess of £105 PLUS 15%!!

On Alfie’s routine check-up on 5th December he was examined by the specialist Vet. He was diagnosed with a rectal stricture - a narrowing of the rectum. This was totally unexpected but did explain why, although improving, Alfie had not been recovering as well as he should have been. My poor Alf... He had been struggling to get his poo out and when it did come out it was runny with blood with frequent straining. I was carrying round toilet paper to wipe his bottom as bright-red blood would trickle out (sorry to be so detailed). It has all been very upsetting and distressing for both of us. Instead of returning home with Alfie I had to leave him again so the vet could perform the procedure to widen the narrowing. Alfie also had another full colonoscopy, ultrasound, biopsies and two day/overnight stay! So what I thought would just be a standard consultation costing £97.92 turned into a whopping £3,034.90 .

I had now paid vet fees and medication costs of £6,694.04 by borrowing on the 0% credit card, which, of course, I have to pay back.  I have now reached my limit with no other options.

I have just ordered more medication  to take us through until the next check-up in the New Year - 3rd January 2019.

I simply cannot afford anymore costly treatment for my dear companion which would leave only the unthinkable option. How can I possibly make such a decision based solely on money?

My plan, therefore is to pay off some, or hopefully, all the credit card outstanding amount with your very kind donations. Then I would be able to use the card to continue his treatment. I will set-up a carefully calculated monthly payment,  which will clear the card balance before the 0% term has ended in July 2019 to avoid paying interest.

Now Alfie has had the procedure to widen the narrowing of the rectum his poo is  getting back to normal and is so much easier for him to pass. There is a slight bit of blood which was expected but no embarrassing bottom wiping! He is getting back to his normal self, playing with his mates and running about. I am feeling more positive about his prognosis. The Vet was very pleased with his progress and can feel no narrowing of the rectum, as of yet. If I continue to adhere to the vet’s advice then Alfie should be able to continue to live a happy life into his twilight years.

I would feel that, with your kind help,  I would have done my very best for my trusty and loving companion.

Alfie and I would be so thankful for any contribution you could make.

If you would like to read more about what has happened to Alfie and his background I then I will share his story as soon as I have  finished writing it. I just wanted to get my campaign up and running on GoFundMe  ASAP.